Nine Florida submarkets ranked among the nation’s 100 most expensive last year. Of these, the best positioned was Miami’s central business district, which landed in 28th with an average office sale price of $504 per square foot. Next, downtown West Palm Beach ranked 32nd ($488 per square foot), and the Weston submarket in Fort Lauderdale took 47th place ($382). Boca Raton and Tampa also recorded expensive submarkets among the 100 most expensive. At $213 per square foot, Florida had a significantly lower statewide price than California.

Arizona was up next with seven submarkets out of 100, the most expensive of which was North Gateway in Phoenix. It ranked 60th on our list, with an average price of $329 per square foot. The remaining six entries from the state were all located in the Valley of the Sun, including Peoria, Deer Valley, Gilbert, Chandler and Scottsdale’s South and Airpark submarkets.

Key takeaways from the report: 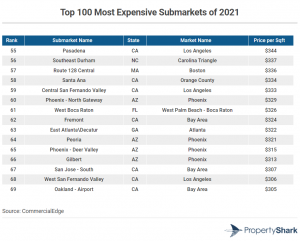 To determine the most expensive submarkets in the U.S., we looked at office transactions closed between January 1, 2021, and December 31, 2021, according to data provided by CommercialEdge. For the purposes of this study, we also used CommercialEdge’s delimitations of submarkets as component areas of a larger office market.