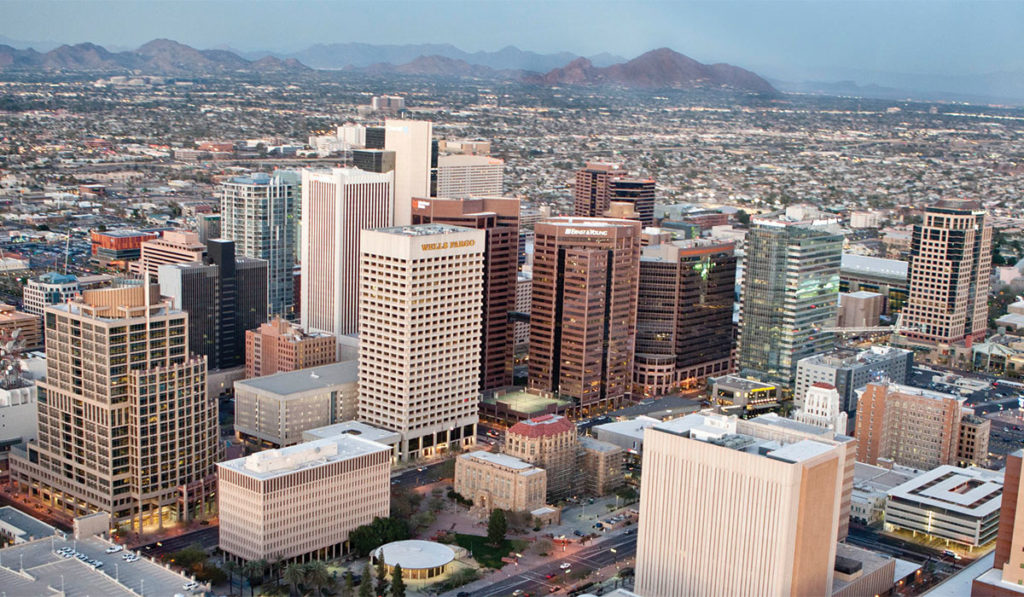 Downtown Phoenix may not be the densest of metros, but a construction boom is making prime land for development scarce. When developers can no longer build out, they go up. More than a dozen mid- and high-rise buildings are slated for the gaps in the Downtown Phoenix skyline over the next few years.

A few mid- and high-rise projects under construction, breaking ground or in pre-construction right now include the LINK PHX, a 30-story multifamily project on Third and Pierce streets expected to finish in Q3 of next year; The Stewart, a 19-story multifamily project located on Central Avenue and McKinley Street that will open above a former car dealership built in the ‘50s; The Kenect Phoenix, a 24-story high-rise located at 355 N. Central Avenue that will break ground in Q4; and The Battery, a 278-unit mid-rise located south of Talking Stick Resort Arena.

These projects are far from the only skyline-changing buildings coming to Downtown Phoenix. Sage Policy Group suggested an 85.1-percent increase in foreign investment to the multifamily sector in 2015 and is powering the development we’re seeing today. There are many projects already in the pre-construction phase for Downtown Phoenix, which means the skyline has a lot of growing up to do through 2020.

There are also societal incentives. Millennials and baby boomers are driving a generational push for multifamily living. They want to live closer together, own less and have everything they could need within reach. Downtown Phoenix is a prime region for this kind of lifestyle, which means buildings are following the last decade of investment that includes Valley Metro’s light rail, the Biomedical Corridor, ASU’s Downtown campus, CityScape and Phoenix Convention Center.

Perhaps the biggest growing pain — and opportunity — for these Downtown projects is labor. Arizona has an overstressed labor market despite being the state with the fifth-highest year-over-year growth in construction jobs, according to data analyzed by Sage Policy Group. In Arizona, 14,900 construction jobs were added to the industry between August 2017 and 2018. Of those, 13,600 were located in Metro Phoenix.

This is a high time to be in Downtown Phoenix, and the community shouldn’t expect a slowdown until 2021 — if even then.

Frank Bejarano is operations director at UEB Builders in Scottsdale, who oversees the company’s ongoing construction in the Southwest.