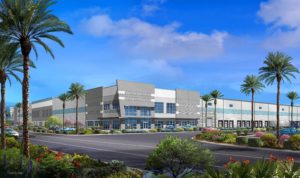 A new industrial developer has arrived in Arizona, and it’s one that is going to be popping up more and more across the Phoenix market. US Capital Development, which is based in St. Louis, MO and has several active projects east of the Mississippi, broke ground on its first development in Arizona recently. Falcon Park 303 Phase I will be a 599,468 square foot speculative industrial product located along the red-hot Loop 303 Corridor in Glendale.

US Capital Development Managing Partner and CEO Scott Sachtleben noted during the groundbreaking ceremony that their firm has grown rapidly in its last four years of operation, quadrupling in staff size, with remarkable talent and developing nearly $2 billion of product while doing so.

“Within the next 12 months, we’ll have another $1 billion of vertical development in the queue,” Sachtleben said. “This is our first entry into the Phoenix valley and we’re excited about the potential that we see here in Glendale. We’re very anxious to get going.”

“I want to thank the team at US Capital Development for their investment and their trust in our partnership,” noted Glendale Mayor Jerry Weiers. “We’ve been growing at warp speed and that has everything to do with our partners and the trust that they place in the City of Glendale. This is just one of several buildings, so we’re not done after today, in fact, we’re just getting started.”

Falcon Park 303 Phase I sits on 36.75 acres along Camelback Road at 152nd Ave., just over a mile east of the Loop 303. The building will feature 40-foot clear heights, with 92 dock-height loading doors and four drive-in loading doors. The 599,468 SF space is divisible by half. The building is expected to be completed by August of 2022.

The team working alongside US Capital Development includes general contractor Willmeng Construction, architect Gray Design Group and civil engineering firm Hilgart Wilson. The leasing on the development is being handled by the Cushman & Wakefield team of Andy Markham, Mike Haenel and Phil Haenel.

“Willmeng is grateful to US Capital Development for the opportunity to partner with them on this project,” said Thomas Jarvis, Willmeng Construction Vice President and Partner. “There are multiple opportunities across the Valley that we’re working with them on and we’re ready to help Scott and his team establish a successful presence here in Arizona.”

US Capital Development is also working on plans for Falcon Park 303 Phase II, which will be a 325,000 SF speculative industrial building. Along with Falcon Park 303, Sachtleben said that his firm is in various stages of planning on at three other industrial developments across the Valley. He noted that by the first quarter of 2022, US Capital Development will have 3 million square feet of industrial product coming out of the ground in the Phoenix market.

Nelson Grumney, who heads up development opportunities for US Capital in the Phoenix market, added, “the pandemic fueled surge in e-commerce, increased consumer demand and the reshoring of manufacturing and warehousing has introduced a huge need for additional industrial product nationally. With the large growing population base in the Valley, pro-business regulatory environment and proximity to multiple markets, we feel that we are well positioned in the Southwest Valley.”

US Capital Development is a real estate development company based in St. Louis that has its origins dating back to 1994. The fall of 2018, the firm announced its repositioning as USCD following a period of rapid growth and expansion into multiple U.S. markets. Since the middle of 2017, the company has sourced and initiated nearly $2 billion dollars of self-directed development within various US markets.

Willmeng Construction, established in 1977, is a Phoenix-based commercial general contractor specializing in ground-up and tenant improvement projects for the public and private market sectors in Arizona.