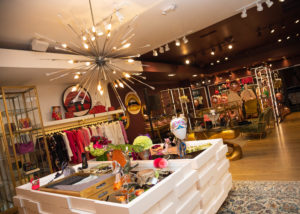 To Be Continued, a leading luxury consignment boutique headquartered in Scottsdale, announced today it will open a full-scale, pop-up shop as well as a brand-new retail concept geared toward Gen Z later this month at The Shops at Town & Country in Phoenix.

To Be Continued – The Pop-Up will comprise 2,625-square-feet and will share the same lavish feel as its other locations with beautifully curated and impeccably displayed designer handbags, shoes, jewelry, accessories and clothing.

Amid the pandemic, the company shifted to selling on social media, resulting in exponential growth as it exposed the brand to a new global audience of people seeking luxury goods. The pop-up will continue to build on this momentum, rooted in offering extravagant finds.

Simultaneously, the company will debut Resale Revolution, a new concept that will mix vintage and contemporary styles with a splash of luxury classics within a 3,748 square-foot location. The store will operate on an immediate buyout model and cater to younger customers interested in selling pre-owned goods and supporting the sustainable clothing movement.

“This latest evolution means so much to me, especially launching it at such an iconic location in the Valley,” said Chrissy Sayare, co-owner of To Be Continued. “While we’ve found incredible success with social selling, my customers love the thrill of the treasure hunt. There’s something so gratifying about finding the perfect piece and being able to bring it home immediately. We’ll be able to provide that personalized brick-and-mortar experience with these two new stores.”

Both stores will be located at The Shops at Town & Country, an open-air shopping experience by RED Development in partnership with Jim Shough. To Be Continued opened its flagship Scottsdale store at RED’s The Shops at Hilton Village in 2013. Since then, business has flourished and the brand has expanded into Scottsdale Quarter along with out-of-state stores in Dallas and Los Angeles.

“To Be Continued has been instrumental to the success at our Hilton Village center,” said Mike Ebert, managing partner at RED Development. “We’re always impressed by the enthusiasm and creativity that Chrissy brings to every project since the inception of To Be Continued and we’re proud to be the home of these new ventures.”

A wholly integrated commercial real estate company, RED Development maximizes asset value and performance for its high-quality retail and mixed-use portfolio that comprises 21 properties totaling 9 million square feet in 7 states. For more than 20 years, RED has been a preferred partner for national retailers and investors. The company also works with third-party property owners seeking RED’s expertise in remerchandising and repositioning properties to improve profitability and appeal. A privately held company headquartered in Phoenix, AZ, RED builds on its development capabilities as an active acquirer of existing properties.