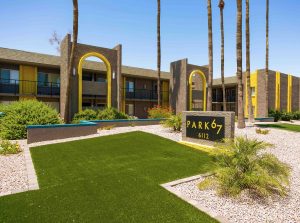 “This acquisition marks our seventh property acquired in the Phoenix market and increases our foothold in the Phoenix area to nearly 1,200 units,” said Tower 16 co-founder Mike Farley. “We remain bullish on the Phoenix region given the continued in-migration and strong employment growth coming out of the pandemic and are actively looking to expand our presence there.”

Since its founding in 2017, Tower 16 has entered several other markets throughout the West, having acquired nearly 5,700 units in California, Las Vegas, Phoenix, Tucson and Denver. The company seeks markets with increasing demand for workforce housing driven by job growth and in-migration but with relatively low levels of new supply. According to company executives, Tower 16 is well underway on its goal to acquiring 2,000 units in the Phoenix market over the next couple years.

Park 67 Apartments is located at 6112 N. 67th Ave in Glendale, Ariz. The property includes a leasing office, fitness center, playground and a pool. The property is located within minutes of the U.S. Route 60 with strong access to north Phoenix and the West Valley, which is home to one of the fastest growing e-commerce and distribution markets in the country.

Tower 16 will be overseeing close to $4.5 million in upgrades and renovations at the property including modernized unit upgrades, exterior common areas and landscaping enhancements. The company will also be adding outdoor amenities including an updated pool area, barbecues, seating and outdoor gaming areas.

“The property offers significant renovation opportunity, and we look forward to physically transforming the project to improve the resident experience for our tenants,” said Tower 16 co-founder Tyler Pruett.

Tower 16 Capital Partners, LLC is a commercial real estate investment and management company focused on acquiring and managing value-add investments throughout the Western United States. Headquartered in Encinitas, Calif., Tower 16 was founded in 2017 by principals Mike Farley and Tyler Pruett who have over 40 years of combined institutional real estate experience with an emphasis on value-add investing. Since 2017, the Company has acquired nearly 6,000 units representing close to $900 million of assets under management.