The building last traded in 2013 for nearly $11 million 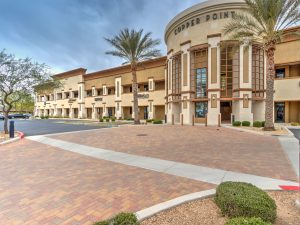 Chicago-based CA Ventures has entered the Gilbert, Ariz., medical office market with the purchase of Copper Point. The investor paid $33 million for the property in an off-market transaction. West Coast Capital Partners sold the property, which was 96 percent occupied at the time of the sale.

A Newmark team of Kathleen Morgan and Trisha Talbot negotiated on behalf of West Coast Capital Partners in the transaction, while CA Ventures was self-represented. Newmark is also the leasing manager of the property.

According to CommercialEdge, Copper Point last traded in 2013, when West Coast Capital Partners acquired it for $10.7 million. In 2019, The Decurion Corp. acquired a 36 percent ownership stake in the property, also for $10.7 million. The same year, the asset became subject to a $16 million loan, held by TIAA.

Last year, CA Ventures launched a new medical office and life sciences division. The firm announced at the time that it will invest $500 million annually in this new branch.

The newly acquired Copper Point is a Class B, two-story, 91,805-square-foot building, located at 3530 S. Val Vista Drive. Completed in 2007, it offers floorplates ranging from 13,478 and 20,071 square feet and is occupied by a mix of orthopedic surgery, oncology, cardiology and lab tenants.

Copper Point is situated adjacent to the Santan Freeway and in the vicinity of Dignity Health Mercy Gilbert Medical Center and The Medical Plaza at Spectrum, which comprise a multitude of other health care facilities. According to Newmark research, the Gilbert medical office market has a 16.5 percent higher average asking rent when compared to the Phoenix metro, due to the quality of the product.