The facility will create more than 300 jobs 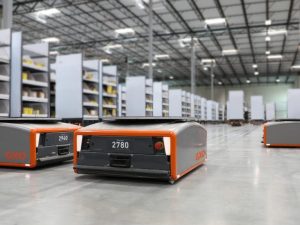 Abercrombie & Fitch Co. has partnered with GXO Logistics Inc. to establish a distribution center in Goodyear, Ariz. To that end, the companies will lease a 715,000-square-foot, Westcore-owned development, according to the Phoenix Business Journal.

Slated to become fully operational in late 2021, the facility will serve as the retailer’s new hub for its West Coast operations and is expected to bring more than 300 jobs to metro Phoenix.

Part of the 1,600-acre PV 303 master-planned business park, the facility will take shape on a 45-acre parcel carrying the address of 17780 W. Thomas Road, according to public records. The developer broke ground on the project in 2020, financing the construction with a $39.6 million loan from U.S. Bank, according to CommercialEdge. Delivery is expected this October.

Designed to be energy-efficient and climate-controlled, the one-story warehouse will have 36-foot maximum clear height and ESFR fire sprinklers. When fully operational, the distribution center will feature advanced automation, including goods-to-person robots, as well as intelligent analytics such as AI and machine learning.

Situated some 8 miles northwest of downtown Goodyear and 2 miles north of Interstate 10, the property isn’t the first Goodyear warehouse in GXO’s portfolio. The company also leases a 640,000-square-foot logistics property at 16560 W. Sells Drive. Formerly known as XPO Logistics, the firm currently operates seven warehouses in the metro Phoenix region and the new agreement will bring its local footprint to more than 2 million square feet.

Abercrombie & Fitch will operate its new distribution center near several other big business brands including Amazon, Ferrero USA and Healthcare Arizona, all located within a 2-mile radius from the facility. And more companies continue to establish a presence in the area, as KeHE Distributors recently announced the October inauguration of its 16th distribution center at 17510 W. Thomas Road.

And there’s more to come. In September, CapRock Partners started work on a 3.4 million-square-foot logistics park that marks Phoenix’s largest speculative industrial project ever. The development will come online in two phases on a 183-acre site at the northeast corner of North 59th Avenue and West Van Buren Street.

One of the area’s largest projects, the 5.5 million-square-foot Cubes at Glendale, also includes speculative distribution space within its 1.2 million-square-foot Phase I that broke ground in March. The development is adjacent to Luke Air Force Base.