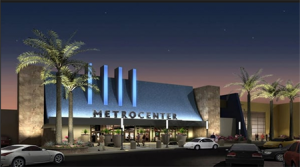 Concord Wilshire Capital and TLG Investment Partners, in partnership with Carl DeSantis’ CDS International Holdings Inc., announced today that the acquisition of the Metrocenter Mall, including the Dillard’s Building and U-Haul Building (formerly Macy’s Building) has closed. The transaction was completed with no mortgage financing on the property and will pave the way for revitalization of one of Phoenix’s most iconic properties.

The development group has formed a strategic alliance with Hines, the international real estate firm, to redevelop and repurpose the Metrocenter Mall into a community-driven walkable village that will be home to a variety of residential apartment options including ownership and rental, curated boutiques, popular retail stores, restaurants, bars, a town-center park, and other commercial and entertainment venues. The new village will be situated on approximately 64.2 acres of prime land in a qualified Opportunity Zone. The plans for the village include over 2,600 multifamily units, 150,000 square feet of commercial and essential and service retail and 4,100 surface and garage-deck parking spaces. Total construction costs are expected to be over $850 million. The development team has also signed agreements with the City of Phoenix for a public private partnership for public improvements.

The revitalized Metrocenter property will be designed as a self-contained, transit oriented community, encompassing the city’s new Light Rail Station that is currently under construction on site. The City of Phoenix is investing approximately $150 million to build this Light Rail Station, which is scheduled to be delivered in 2024 as part of the Northwest Extension. The Light Rail Station will serve as one of the major focal points of the development and will provide direct connectivity to Downtown Phoenix, the Phoenix Sky Harbor International Airport, ASU, and communities to the east.

Residents and visitors will be able to enjoy an array of anticipated amenities, including pet-friendly parks and greenspace, an amphitheater, pedestrian and bicycle pathways, a walkable retail promenade, shops, restaurants and immersive water features. The village will also be designed to integrate with and complement certain existing amenities and venues within the Metrocenter Mall through its partially shaded internal pathways and roads. The existing amenities and shops include a 150,000 square foot Walmart Supercenter, a public library, the Arizona Canal with its own pedestrian and bicycle pathways, the Rose Mofford Park (which provides free afternoon activities for children and teenagers), a theme-park, and a cinema.

“We are excited to be a part of the redevelopment of the former Metrocenter Mall into a vibrant mixed-use community with a sense of place that will enhance the public investments,” said Chris Anderson, Senior Managing Director of Hines.

“Together, with the strong support of the city, including the construction of the light Rail Station at our Village, we are creating a one-of-a-kind community, by addressing the needs of the community and integrating with the vision of the City,” said Chris Nieberding, President and CEO of TLG.

“Late cycle investing requires that we are very focused on selecting only the best partners with projects in the best locations as we thoughtfully deploy CDS capital,” said Bill Milmoe, President of CDS. “We especially like the public-private partnership to make this project a success. For CDS, Metrocenter checks all of the boxes to make the project our first major investment in the Phoenix metro area.”

Greenwall Capital Management sourced and advised CDS in the transaction.

“I could not be more excited for this next step towards bringing this incredible vision to reality,” said Councilwoman Ann O’Brien. “I grew up going to Metrocenter, worked one of my first jobs here. It’s bittersweet, but with change comes new opportunity, and Mr. Sirang and his partners are the right people who will return this area to the crown jewel of the desert it once was!”

“To see a neighborhood come back to life is tremendous. The City of Phoenix has done a lot of work to make this possible, not the least of which is the Northwest Light Rail Extension project to serve this destination,” said Phoenix Mayor Kate Gallego. “Metrocenter has memories for so many of us in Phoenix. As we look to the future, Metrocenter now means jobs, attainable housing, and restoring community strength to northwest Phoenix.”