There’s a New ‘Business as Usual’

Disruption from the COVID-19 pandemic is changing all business relationships

In this third week of mass social distancing (with more than 225 million Americans ordered to stay at home), CEOs are beginning to ask not only how to survive the pandemic, but what they will be surviving into. Radical events bring radical change, and the American workplace — and quite possibly the American economy — is in the midst of its most significant disruptive and potentially transformative experience in a century. So how can a business position itself for a post-pandemic world?

While nobody can predict the future, it is possible to plan around unpredictability by keeping nimble, identifying new economic opportunities and recognizing the changes happening to the economy, the country and the world. I speak from the experience of guiding the largest translation company in the world through world-changing events, including 9/11 and the 2008 financial crisis, both of which radically reshaped both my industry and international business.

Accept that the past is in the past. We have to keep moving forward. I don’t think this has completely sunk in for a lot of people, but there is no “back to normal.” Whatever the world looks like on the other side of this, it’s not going to look like it did in January. Social distancing is in the process of reinventing how people work, blurring the lines between on and off the clock, while typically undervalued roles (such as supermarket clerks and restaurant workers) have quickly been revealed as essential infrastructure. Everything from the relationship between employer and employee to supply and distribution is going to have to change to account for the new realities we suddenly face.

Embrace flexibility. Being dynamic beats being efficient. The last 50 years have seen the development of the “just-in-time” economy, where highly efficient supply lines keep products moving at lightning speed with minimal variances. But the problem with efficiency is that it is dependent on conditions remaining the same, which, given enough time, the world rarely does; efficient machines are almost by definition unable to accommodate a changing market. Right now, all our efficiency engines have ground to a halt, and, rather than focusing on getting them up and running, we must instead work on building new, more dynamic business models that can move quickly when conditions change. We need to keep our businesses humming as best we can, even in these uncertain times when international shipping, air travel and manufacture are all suddenly in limbo.

Identify international vulnerabilities. I don’t want to say that globalization is over, but I do think we’re going to see it reinvented. Long supply chains have gone from being an advantage to a crippling weakness, as we’re witnessing firsthand in this crisis. Urgently needed ventilators require supplies from a dozen countries, including China, at a time when those supplies have never been harder to obtain. Retooling business for a post-pandemic world will mean finding domestic vendors for things we don’t even currently manufacture here, which creates a remarkable opportunity for CEO savvy enough to recognize where they can become that vendor. As long as a business is dependent on overseas supply chains, it is going to be vulnerable to the next disruption — and considering that this pandemic may come in waves, that will not be sustainable.

Understand emerging job-security considerations. Once we get through this — and we will get through it — businesses that survive will have to navigate a talent pool that has a new outlook on job security. In March, 3.3 million people applied for unemployment, making previous highs look like mere blips by comparison. That number is only going to increase the longer this stretches on, as employers scale back to deal with lost business or shutter entirely; retail employees are especially vulnerable to this. Any company that wants to thrive in the pandemic and post-pandemic world needs to recognize the financial trauma this event is going to cause and make job security a major focus; can those employees trust they will not be put on the street? Because they will flock to the businesses that can offer that, and, with modern economic and cultural sensibilities placing a lot of stock in a company’s values, those same businesses can expect a glut of new business. “Worker care” (much like “workplace culture”) or something similar is likely going to be a buzzword in the months and years to come. 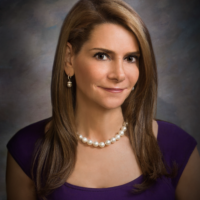 Liz Elting, founder and CEO of the Elizabeth Elting Foundation, is an entrepreneur, business leader, linguaphile, philanthropist and mother. After living, studying and working in five countries around the globe, Elting started TransPerfect out of an NYU dorm room. During her tenure as co-CEO, she grew TransPerfect into the world’s largest language solutions company, with more than $600 million in revenue, 4,000-plus employees, 11,000-plus clients and offices in more than 90 cities worldwide. Elting has been recognized as a NOW “Woman of Power & Influence,” an Enterprising Women “Enterprising Woman of the Year” and one of Forbes’ “Richest Self-Made Women.”