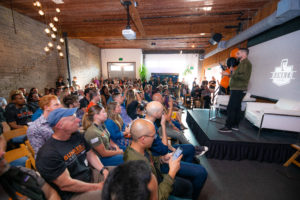 “Bunker Labs was started in 2014 by veterans who got out of the military and started their own business,” says Dillon Drew, Bunker Labs Phoenix city leader. “As such, we understand the unique challenges associated with the transition process combined with the difficulty of starting a business. We have compiled and curated the best entrepreneurial training from the brightest minds in the field to share out with our military community.”

Bunker Labs was originally founded in Chicago. Bringing it to Arizona, Bunker Labs opened the Phoenix chapter in February of this year. “Phoenix has both a strong military community and is a hub for entrepreneurship, making it a good entry point for us to begin work on Arizona,” Drew explains. “We work with anyone and everyone, from financial planners to retail product creators, food and service to technology; we can help in all industries at all stages.” To that end, Bunker Labs offers a variety of programming for entrepreneurs at any stage, from those considering starting out to those with more mature, growth-stage companies.

One of Bunker Labs’ programs is Veterans in Residence, which is available for those veterans who have thought it out and truly want to pursue their idea. Applications for the first cohort in Phoenix are open now and close April 26.

“Awareness of the Bunker Labs mission and purpose throughout the Phoenix metro community has been our biggest challenge so far,” Drew says. One approach has been to try to engage the larger entrepreneur community here through the “Battle Buddy” program, bringing a fellow veteran or friend that has interest in entrepreneurship and small businesses to Bunker Lab events to capitalize on the strong camaraderie in the military community.

“One of our mantras at Bunker Labs is, ‘You’ll be what you see,’” Drew shares. Noting that 25 percent of transitioning service members want to start a business, he says, “One of the many reasons why more veterans are not becoming entrepreneurs is that they don’t know all the options available to them. After World War II and Vietnam, veterans returned home and started everything from shoe companies (Nike) to shipping companies (FedEx). Veterans today are just as ambitious and innovative in entrepreneurship, but their stories aren’t being told. We want to find and tell their stories.”