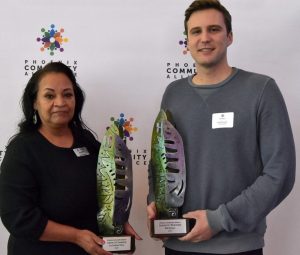 When the awards were previously known as Center City Starr Awards, individuals honored included public figures like former Phoenix Suns and Arizona Diamondbacks owner Jerry Colangelo, instrumental in the development of the Footprint Center, and U.S. Rep. Ed Pastor, who served in Congress for 23 years.

In recent years, the awards reflected the next generation of placemakers — people who contributed to Phoenix’s entrepreneurial shift. Honorees included Kimber Lanning, the founder of non-profit Local First Arizona, Cindy Dach, the CEO of Changing Hands Bookstore, and Charlie Levy, owner of multiple local venues, like the Crescent Ballroom.

“The Greater Phoenix area is in a constant state of renewal and these awards represent what has and what continues to position our city for the better as a unique place to live, work and play,” PCA Chair Diane Haller said.

The focus of the award, which is given at the Annual PCA Member Luncheon, is acknowledging individuals instrumental in improving the quality of life within the center city. This is where the award gets its name.

Since 1993, past honorees included a wide variety of figures from public life, politicians, business owners, educators and others.

In 2020, the Center City Awards were rebranded and split into two separate awards: Champion and Newcomer, to denote robust, lifetime legacies and influences to our local community, as well as people well on their way to such a standard.

For Kell Duncan and Eva Olivas, this year’s respective Newcomer and Champion winners, they reflect the trend of past recipients striving to make their community more inclusive, and creating interconnectivity through their own non-profits, businesses and efforts.

“I hope [Downtown Phoenix] will be a place that has kept its character, charm and small-city feeling, even though it will inevitably continue to grow,” said Kell Duncan, owner of The Churchill. “Growth can be an amazing thing, but we have to be intentional with it, or we will squander so many valuable opportunities.”

Within the local Phoenix community, Duncan is known for The Churchill shipping container retail development, which has served as an incubator for local businesses to open their concepts in a cost-controlled destination venue. Olivas is executive director of the Phoenix Revitalization Corporation, a non-profit spearheading many local improvement projects in the Central City South neighborhoods.

In 2020, Newcomer Dominic Papa and Champion Sheila Harris, Ph.D., received their awards in a private virtual ceremony due to the pandemic.

Local artist Joan Waters reimagined the physical award/sculpture, taking inspiration from Palo Verde trees to reflect the hard work of individuals who become the figurative roots of the tree, cultivating the betterment of the local community.