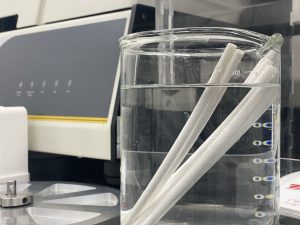 Gilbert-based Footprint, a global materials science technology company focused on creating a healthy planet, today announced that it has sold more than half a billion plant-based straws since 2019 supporting customers including McDonald’s in Canada, Chick-fil-A and Panera Bread in their efforts to eliminate plastic straws. Footprint’s paper straws, which underwent a year of testing before launch, are designed to prioritize strength and retaining their shape to provide an experience that consumers expect without the plastic.

“This week on Earth Day, we ask people to take a pause and think about the little things they can do to make a difference in their community. If plastic was a country, it would be the world’s fifth largest greenhouse gas emitter, beating out all but China, the U.S., India and Russia,” said Footprint co-founder and CEO Troy Swope. “People can pledge to eliminate single-use plastics, including straws, by switching to plant-based materials and getting more educated about ways they can contribute to a healthier planet.”

Straws became a cultural flashpoint in 2018 when a video emerged of a sea turtle with a straw stuck up its nose that was being extracted by a team of marine biologists. The video shot by Christine Figgener, PhD, a marine biologist who was exploring off the coast of Costa Rica, has been seen more than 108 million times on YouTube and broadcast around the world. Figgener is now the director of science and education for the Footprint Foundation.

“Straws are just the beginning when it comes to getting rid of single-use plastic,” said Figgener. “We are drowning in plastic pollution, and every step we take toward eliminating single-use plastic is a step in the right direction. I see the result of plastic pollution every day in the work I do in the marine ecosystem and we’re committed to educating wherever possible to help ocean cleanup.”

State and local governments around the world meanwhile have begun instituting bans and restrictions on straws and other single-use plastics, but consumers too have an important role to play by refusing to use plastic straws while their go-to brands make the transition to new alternatives.

Footprint’s straws have been designed and engineered to help eliminate the soggy, collapsing performance of the typical paper straw. The design is stronger because of the type of paper used, and the proprietary way the straw machinery winds the paper into straw form. An independent source for review validated that Footprint straws meet the requirements for compostability acceptance standards at commercial composting facilities.

Straws make up one category in Footprint’s portfolio of plant-based fiber solutions, including custom bowls, plates, meat trays and unique packaging for some of the world’s biggest brands, like Conagra, P&G, Beyond Meat and Sweetgreen, helping companies and consumers move away from plastic without sacrificing performance.