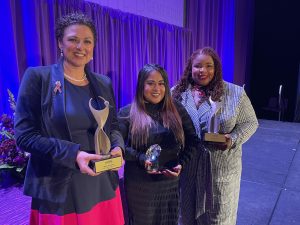 “The Greater Phoenix Chamber’s ATHENA Awards celebrates the most inspiring women leaders in the Valley,” said Todd Sanders, president & CEO of the Greater Phoenix Chamber. “These influential women are dedicated to building a brighter future and ensuring our community remains strong. They embody the best of the Arizona business community and we look forward to seeing how they will carry on the legacy of ATHENA through their work.”

The ATHENA Awards, named after the Greek goddess of courage and wisdom, is a program of ATHENA International, a non-profit organization dedicated to creating leadership opportunities for women.

Molly Stockley is the Regional Vice President of Marketing at CTCA holding executive-level positions on both the Phoenix and Chicago hospitals’ Executive Teams. She rooted herself in the Phoenix market and was excelling in her 18-year career in broadcast media, but she knew she could do more to honor her close friend, who had passed away after suffering from cancer, and help others. In 2008, she took initiative and made the courageous leap from sports to media to healthcare, at Cancer Treatment Centers of America® (CTCA) Phoenix, a national network of cancer hospitals and clinics, where she led with her direct-to-consumer expertise, creativity, grassroots marketing, and passion.

Jeanine Bashir’s devotion to youth and women’s issues has been the driving force behind her work in the community. Her professional career has included working with various organizations that serve the community and government sector alike. She is currently the Regional Director for the First Things First’s Phoenix South Region. She is responsible for creating a family-centered, comprehensive, collaborative, and high-quality early childhood system that supports the development, health, and early education of all Arizona’s children, birth through age 5, in the South Phoenix, Laveen, and Maryvale areas. Bashir has been recognized for her experience in the community and in the nonprofit sector, as well as and her work on child welfare and maternal & child health issues.

“It’s an honor to receive this ATHENA Award; it truly means so much to me to be recognized with such a wonderful caliber of women. I believe it speaks to the work that I’ve been doing, and I’m really excited to be a part of this,” says Jeanine Bashir, 2021 ATHENA Award recipient in the Public Sector.

“It has been such an honor and this process has been mind-blowing. We are surrounded by the best of the best in the community, and I am just so honored to be a part of that. I am so grateful,” says Stella O’Rourke, 2021 ATHENA Award recipient in the Young Professional category.

Stella O’Rourke is a passionate advocate and voice for her community. She chose to begin her career in the nonprofit sector to lift up people experiencing similar life experiences, as she had as a child. Throughout her career, O’Rourke has greatly enjoyed cultivating sustainable support for programs surrounding youth and childhood development, life skills advancement, education, workforce development training, foster and adoptive care, and health services particularly for children and families. Most recently, her time is dedicated to developing corporate and community partnerships through fund development, events, volunteerism, and corporate social responsibility.