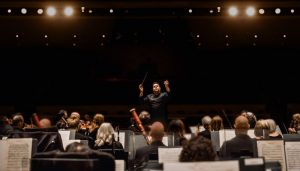 The Phoenix Symphony (TPS) is announcing its 2022-23 concert season, which features performances at Symphony Hall and also embarks on a series of concerts at venues across the Valley, including Mesa Arts Center, Orpheum Theatre, Camelback Bible Church and the Symphony’s newest venue partner, the Madison Center for the Arts.

The season will launch with A Romantic Evening at Symphony Hall on October 14-16. The performance features a collection of landmark works that showcase the sounds of the full orchestra with Virginia G. Piper Music Director Tito Muñoz and virtuosa violinist Sarah Chang. Chang makes her much anticipated return with a performance of Bruch’s Violin Concerto No. 1, one of the world’s most beloved violin concerti. Gustav Mahler’s epic first symphony—often referred to as “Titan”—showcases the power and intensity of the orchestra while Dvořák’s Carnival Overture will delight audiences.

The season includes classics and pops performances and fun programs designed to warm any newcomer: Hocus Pocus in Concert Live to Film (Oct. 28-30); Best of Broadway (Nov. 11-13); Disney in Concert: Around the World (Nov. 25-27); Totally ‘80s (Jan. 27- 29); The Music of John Williams in Concert (Feb. 17-19); and The Princess Bride in Concert Live to Film (March 31-April 2). Holiday Pops will take place Dec. 2-4 at Symphony Hall. Watch a video announcing the 2022-23 season. Tickets are available for purchase on The Phoenix Symphony’s website.

“The 2022-23 season is our second season back after COVID. We are excited for The Phoenix Symphony to be in full swing with a few new members of our orchestra and to invite world-class guest artists to Phoenix for compelling performances,” said Tito Muñoz, Virginia G. Piper Music Director. “The season was thoughtfully curated to offer something to appeal to everyone with new venues to connect with new audience members. We have classics, pops and engaging programming for the family. A night at The Phoenix Symphony is a night to remember.”

On a spooky note, The Phoenix Symphony will make you feel like you are leaving Symphony Hall for a magical Halloween romp through Salem, Mass., Oct. 28-30, in Hocus Pocus in Concert Live to Film. The movie is about three witches, known as the Sanderson sisters, who attempt to steal the life essence from Salem’s children so they can have eternal life. The film stars Bette Midler (Winifred), Sarah Jessica Parker (Sarah), Kathy Najimy (Mary), Omri Katz (Max), Thora Birch (Dani), and Vinessa Shaw (Allison). The Phoenix Symphony plays the score as the film is shown on the screen above the stage.

On Nov. 18-20 the Dancers, Dreamers and Presidents program will make its premiere at The Phoenix Symphony. The program, to be performed at Symphony Hall, is inspired by a dance between former President Barack Obama and Ellen DeGeneres in 2007 and is composed by Arizona State University’s own Daniel Bernard Roumain.

Jennifer Koh, a celebrated and Grammy Award-winning violinist, has curated the REVERB: Contemporary Music Festival to be held January 18 and January 20 at Central United Methodist Church.

You won’t want to miss The Music of John William in Concert, Feb. 17-19 at Symphony Hall, featuring selections from some of the composer’s most powerful film scores, including Star Wars, E.T., Harry Potter, Indiana Jones, Saving Private Ryan, and more!

Turning Points at Symphony Hall on March 10-12 will begin with a work, Primal Message, from a Phoenix composer, Nokuthula Ngwenyama. This gripping fantasia invites examination of human evolution. The program of Romantic, Neo-Classical, and contemporary works will be guest conducted by New Jersey Symphony Music Director Xian Zhang. The elegant and expressive pianist Andrew von Oeyen is guest soloist.

In Passion and Power on April 28-30, rising star soloist Eric Lu will perform the piano at Symphony Hall. He is a Leeds International Piano Competition winner and a recipient of the 2021 Avery Fisher Grant. The program begins with Richard Strauss’ popular Don Juan, based on a play about the legendary figure of Renaissance Spain, and ends with Beethoven’s 7th symphony.

The Phoenix Symphony Chorus will share the stage with the TPS for five programs and they will appear in a chorus-only program at Symphony Hall on April 27. Hailed as a “gem of Phoenix’s cultural scene,” the Chorus has impressed audiences in performances throughout Arizona, Carnegie Hall in New York City, and as far away as Vienna.

A detailed list of performances and programs is available at phoenixsymphony.org.