You are here: Home / Just In / Top beam placed on Biomedical Sciences Partnership Building
Just In  |    | 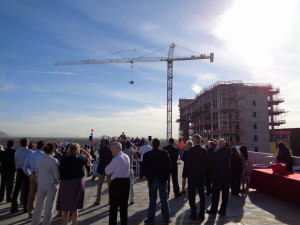 A construction milestone was celebrated Thursday, March 3, 2016 at the new Biomedical Sciences Partnership Building, as the final beam was placed atop the 10-story building in downtown Phoenix.

Located on the University of Arizona College of Medicine – Phoenix campus at 475 N. Fifth St., the 245,000-square-foot research building will be a hub for healthcare and scientific innovation when it opens in early 2017. The ceremony will be from 9 to 10 a.m.

“This building will foster collaborations with scientists that will lead to more cures, better treatments and bring more federal and private dollars to Arizona,” said University of Arizona President Ann Weaver Hart. “All are central to the goals of the Never Settle commitment at the University of Arizona.”

“Phoenix and UofA are one step closer to our vision of creating a truly world-class and cutting-edge bioscience hub in our downtown,” said Phoenix Mayor Greg Stanton. “The Biomedical Sciences Partnership Building will be a vital piece of that plan that will take translational research, healthcare, medical education and our economy in exciting new directions.”

The Center for Applied Nanoscience and Biomedicine will be headquartered in the building. Researchers at the Center are already making cutting-edge discoveries, such as the Rapid DNA test, which detects early-stage bacterial infections. The Center’s interdisciplinary approach aims for early diagnostics of human diseases.

“Completion of this Biomedical Sciences building will allow the University of Arizona to pursue expanded partnerships with industry that we hope will lead to groundbreaking discoveries in the areas of neuroscience, cardiovascular and thoracic science,” Hart said.

Nearly 500 jobs in design and construction were created during the buildout, and another 360 permanent jobs are expected to be created in healthcare, education and biosciences once the building opens next year.

The building is the latest development in the steady expansion of the downtown Phoenix Biomedical Campus and expanding academic medical center. In 2012, the award-winning Health Sciences Education Building opened, housing health education for UA and Northern Arizona University. The University of Arizona Cancer Center at Dignity Health St. Josephs, a 220-square-foot outpatient and research facility, opened in 2015.

The UA has invested nearly $450 million in building projects on the downtown Phoenix Biosciences campus and has built close to one million square feet of capital projects.

The medical school in Phoenix has graduated 205 physicians and has 320 students in training in its continuing mission to address the physician shortage in Arizona. The College of Medicine opened its doors in historic buildings in 2007.

The University of Arizona College of Medicine – Phoenix admitted its inaugural class of first-year medical students in August 2007 and currently has 320 students training to be physicians. The College inspires and trains exemplary physicians, scientists and leaders to optimize health and health care in Arizona and beyond.  The College of Medicine – Phoenix is uniquely positioned to accelerate the biomedical and economic engines in Phoenix and the State by leveraging vital relationships with key clinical and community partners. For more, visit phoenixmed.arizona.edu.

Arizona-based Ayers Saint Gross is internationally recognized for its expertise in architecture and planning for colleges and universities all over the world. Its mission is to engage people and places to create designs that enrich our world. At 170 professionals in three offices – Baltimore, Tempe and Washington, DC – the firm is organized into cross-disciplinary studios specializing in the design of buildings for arts and sciences, student life, and cultural facilities, as well as studios that focus on planning, landscape architecture and graphic design. Current projects in the Tempe office include the University of Arizona Biosciences Partnership Building, Texas Tech University Experimental Sciences Building, University of North Texas Health Sciences Center Interdisciplinary Research Building and Texas A&M University Engineering Education Complex.