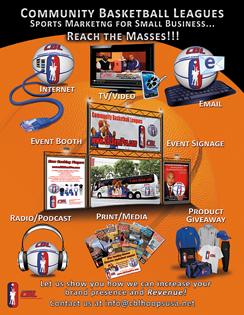 Calling it a “grassroots marketplace,” Jamar Johnson is bringing to Phoenix his concept of Community Basketball Leagues as a platform that connects amateur basketball players and sports-related marketing opportunities for small businesses. Basketball has always been his passion, says Johnson, who went to college on a basketball scholarship and played professionally although not making it to the NBA. He conceived the concept for his Community Basketball Leagues in 1996 and realized the business in 2008, modeling the organization after the NBA while building the model on amateur players, who, he says, number 30 million in the United States. Offering businesses an opportunity to market and brand themselves with a team while providing a program to help young athletes, Johnson launched CBL in his hometown of Elkhart, Ind., and expanded the next year to six more cities.

CBL is structured to have different revenue generators: players registration, sponsorship, apparel sales, admission and concessions. In addition to the games, CBL produces a magazine and a podcast. Businesses or individuals interested in becoming owners can license a team for 12 months, and share in the profits generated by their team.

Johnson relies on existing CBL participants to help expand the leagues. He holds a weekly conference call with players and owners to keep everyone informed as to what’s happening in the organization, and encourages them to spread the word to friends in other cities. “We go where there’s demand,” he says, explaining players can go to the CBL website to register for a team. “When we see registration, we know there’s demand.” The next step is to secure sponsors for the teams. The CBL program includes youth and adult leagues, welcoming men and women. With registration currently filling 11 teams in the Phoenix area, Johnson hopes to launch CBL here when the season begins in May.