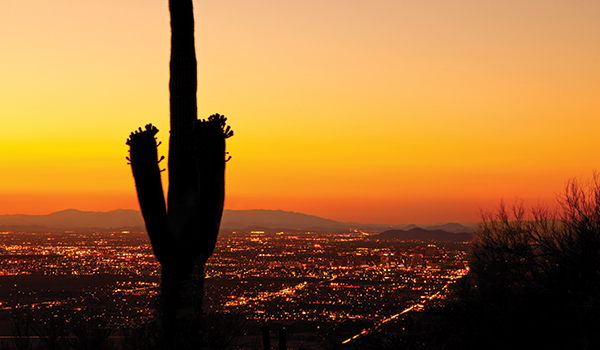 Phoenix-area home prices have been rising since hitting a low point in September 2011. The median single-family-home price rose 32.7 percent — from $150,000 to $199,000 — from last September to this September, according to the most recent report from the W. P. Carey School of Business at ASU. The average listing price of luxury homes — generally defined as those valued at $500,000 or more — is also up, although only about 5 percent. But then, the luxury market didn’t take the hit the overall market has suffered since 2008. The report finds the luxury market continues to perform well, thanks to the rising stock market and a big increase in the availability of jumbo loans. Sales of $500,000-plus, single-family homes grew an incredible 51 percent from September 2012 to September 2013.

Luxury properties span the Valley in gated and non-gated communities, and include horse properties and golf properties. For homes listing at $500,000 to $3 million, the per-square-foot price has dropped about $7, but number of active days on the market has also dropped — from 133 days a year ago to 118 days at the present time.

Inventory is up slightly from the 2,400 of a year ago, but Howard Lein, owner of Scottsdale-based franchise RE/MAX Excalibur Realty, says the number of months’ supply has dropped from 9.4 to about 7. “Sales volume has been up,” he explains, but adds that, currently, it is dropping quickly.

In the Phoenix-area real estate market overall, the number of available homes for sale continues to rise, after the area experienced a very tight supply for months. Active listings, not including those already under contract, went up 32 percent from Oct. 1 of last year to Oct. 1 of this year. More people appear willing to put their homes up for sale as prices rise. “If the current trend continues, supply will exceed demand by the end of the year,” says Mike Orr, director of the Center for Real Estate Theory and Practice at the W. P. Carey School of Business. “We now expect a balanced market to prevail during November. This is great news for buyers since they will experience less competition and be in a strong position to negotiate.”

Institutional investors and out-of-state buyers continue to lose interest in the Phoenix area, since better bargains can now be found elsewhere. The percentage of homes and condos bought by investors in September was down to 22.7 percent, from the peak of 39.7 percent in July 2012. Also, the percentage of Maricopa County residences sold to owners from outside Arizona was only 16.4 percent, the lowest percentage since January 2009. Speaking of the Asian market in particular, Lein says it “has not proven to be as strong as other parts of the country. For some reason, Arizona is being overlooked by the bulk of the Asian buyers versus some of the East Coast and West Coast markets.”

Observing that the luxury market “has been rolling along very well in the first part of 2013,” he notes that, however, a number of factors have slowed new buyers down dramatically. These include interest rate adjustments along with the government shutdown, which brought what was on track to be a spectacular year to a virtual slow down. “Only in the past couple weeks have the phones begun to ring again” he says. “Sellers are bringing new product to the market, giving buyers a new selection of great properties to look at.”

Lein believes sellers are reacting to the sales figures from the first half of 2013 and prices, in some cases, are out of line. But he says, “Buyers are gaining confidence again and are slowly recognizing that even with the slight increase in rates, the lending market is still a tremendous bargain.” And he notes, “With labor shortages still affecting the new home builders, most of the luxury homes being bought still can’t be replaced by new construction costs.”

A major factor in the appreciation of existing home inventory has been the shortage of labor and the rapidly increasing cost of lots. Additionally, Lein observes, “It appears that immigration issues have contributed to the rapid appreciation of residential properties in the Phoenix area. If continued, appreciation could continue at a more rapid pace than other parts of the country.”

Financing continues to be favorable for the luxury market. Says Lein, “There are some incredible programs for the well-healed individual who has relationships with the wealth management divisions of the national banks.”