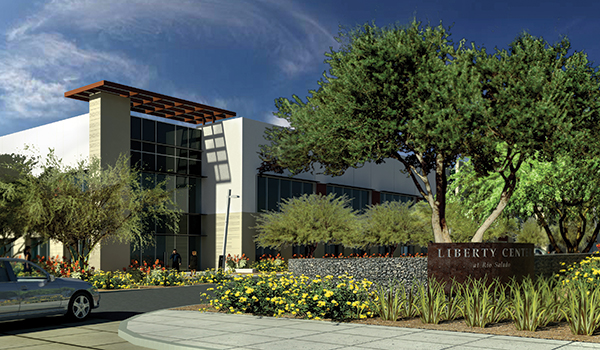 Six hundred thousand square feet of new office space is just the beginning for the Tempe project that will have its official groundbreaking this month at Rio Salado Parkway and Priest Road. At completion, Liberty Center at Rio Salado, being developed by Liberty Property Trust, will offer more than 1 million square feet of office, flex and light industrial space on the 100-acre site, which includes the northeast and northwest corners of the intersection.

The infill site is in a choice location, and the City of Tempe’s economic development director, Donna Kennedy, says the project will bring employment at a major intersection — an important focus of the city’s planning. Director of Leasing and Development for Liberty Property Trust’s Arizona region, Megan Creecy-Herman, notes the proximity to ASU will allow Liberty Center tenants to draw from an educated labor pool and convenient access to all major freeway systems also makes it attractive for employment.

Office buildings can house single tenants, or multiple tenants looking for 50,000 square feet or more. The first, 150,000 square feet, began construction in November and is expected to be completed by June 2014. A light industrial building will offer 210,000-220,000 square feet on the west end of the project, and John DiVall, senior vice president and city manager for the Arizona region of Liberty Property Trust, a publicly traded REIT with properties in 21 markets in the United States and United Kingdom, notes the area’s shortage of industrial space of more than 100,000 square feet has made demand for this type of product so great that the company is “looking into moving that into 2014.” For the office space, too, he says there has been “interest of a level that’s caused us to decide to go ahead with Building 2, which we’re planning on starting in January.”

One-of-a-kind original art pieces to enhance the project are being commissioned for Liberty Center, one of which will highlight an amphitheater built against a levee along the Salt River embankment — an amenity tenants may use for such purposes as outdoor meetings or lunch. Other options for lunch are part of the second phase of the project, which will include restaurant, retail and hotel on the northeast corner Priest Road.